Young monsters played at the boundary between the worlds. They slipped and stranded in a human city. Isolated and unwelcome, they search for each others help and a way back.

Solacebound is a GM-less Game for 3-5 people to play over a few hours. Search a sprawling, oppressive city for your friends, find out who is willing to give you a roof, bash back against authorities, cook together and console each other. Will you find a way back home before all passages close?

Some core mechanics are a hack of Takuma Okadas Alone among the Stars. Play it, it's awesome!

In order to download this game you must purchase it at or above the minimum price of $3 USD. You will get access to the following files:

Support this game at or above a special price point to receive something exclusive.

If you want to play this but can't budget for it for any reason feel free to take one of these copies ❄️ But please rate the game!

Solacebound is a pen-and-paper rpg about monsters trying to survive in the city.

It's 10 pages, with a magazine-style layout, and it's easy to read.

Although it makes it clear from the jump that it's about monsters, Solacebound has a very distinct feeling of being a metaphor, and it's absolutely possible to run this game about refugees, new arrivals, runaways, or anyone else who is marginalized by what should be an environment that supports and assists them.

Mechanically, it plays a little like The Wretched crossed with Belonging Outside Belonging. You use a deck of cards to generate prompts, there's an action economy, you're working towards a long-term goal, but there's also plenty of non-mechanically-rewarded short-term goals that you can pursue that feel more narratively satisfying.

Although the game doesn't commit fully to being about mechanical gameplay or to storytelling, it does have a really strong, consistent feeling throughout. In terms of presenting a landscape and making you as the reader feel an emotion, it's really good at that, and I would recommend it for that alone.

Overall, I think Solacebound is going to appeal to folks who like Quiet Year, My Way, and other rpgs that mix board-game-y elements with pure storytelling. If the idea of telling a story about people lost in a bustling alien city appeals to you, I would strongly encourage getting a copy of this.

-Page 2, last para on the left, missing a period.

Hey there, just thought I would let you know that we picked this out as a highlight in our podcast on the Bundle for Racial Justice & Equality
https://theindierpgpipeline.blogspot.com/2020/06/james-lloyd-itchio-bundle-for-r... 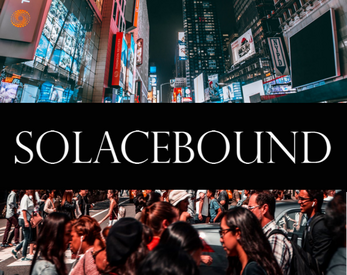